Works on a major extension to a Midlands business park have been completed – with new occupiers expected to be announced in the coming months. 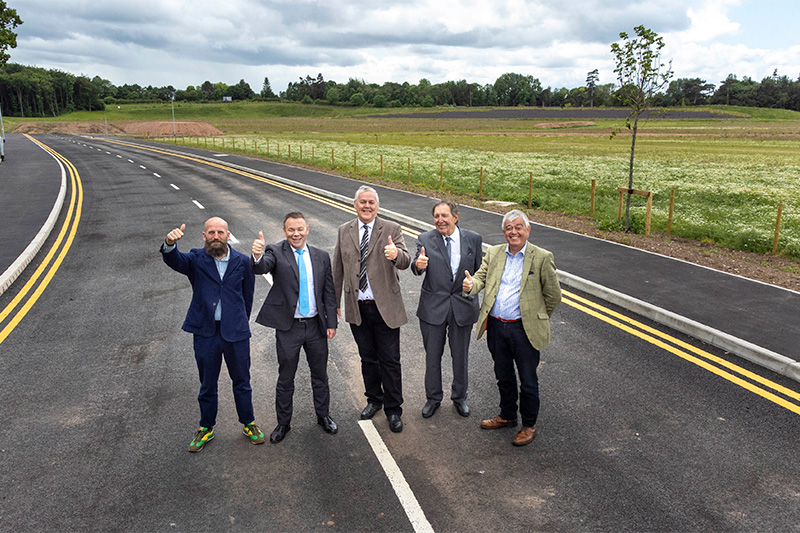 A further 60 acres of land has been added to the west side of i54 South Staffordshire, which is on the county border with Wolverhampton.

The current i54 business park is occupied by multi-national businesses including Jaguar Land Rover, Moog, ISP and Eurofins.

Following investment of more than £1billion, it has a workforce of around 2,700 people, with half of the jobs held by people living within a 10-mile radius.

The extension includes 850,000sqft of fully-serviced factory platforms ready for new occupiers to build units on for advanced manufacturing, technology, training and innovation.

Contractors, Amey, overcame the challenges of the pandemic to complete the works, which saw more than £15million spent with the local supply chain.

The major works included the construction of a one-kilometre road linking the main i54 site to the new extension, new footpaths and cycleways, structured landscaping to create the manufacturing bases, diverting and improving the public bridleway, drainage works, the planting of 10,000 trees, and the development of a further access road to serve future occupiers.

City of Wolverhampton Council Leader, Councillor Ian Brookfield, said: “The team have done an exceptional job to overcome the challenges of the pandemic and make this site ready for new occupiers.

“i54 plays a major part in the lives of thousands of people in Wolverhampton and south Staffordshire and our joint investment at i54 has secured hundreds of millions of pounds of investment and has brought thousands of jobs to the area.

“We have received a lot of interest in the extension from potential occupiers and we expect to be making some major announcements in the coming months on who will be joining the list of prestigious occupiers already at i54.

“We are determined to build on the success of what is already one of the UK’s premier advanced manufacturing business parks.”

Staffordshire County Council’s Deputy Leader and Cabinet Member for Economy and Skills, Councillor Philip White, said: “The i54 South Staffordshire western extension has been a significant project for the county council and our partners. It’s fantastic that it is now complete with the first development set to get underway soon and others to follow in the coming months.

“I’d like to commend the project team for carrying on work safely over the last two years. It means we can start to see benefits to our local economy imminently as it continues its post-pandemic recovery.

“Our long-term economic growth strategy sets out how we plan to develop our key transport corridors, deliver major infrastructure projects and attract investors which support job creation. This helps to generate business rates which in turn supports the funding of public services.

“The completion of the western extension is further demonstration of the strength and success of our partnership with the City of Wolverhampton and South Staffordshire councils.”

South Staffordshire Council Leader, Councillor Roger Lees, said: "We’re delighted to have reached this major milestone in the project which will mean more than 1,000 employees will soon be making i54 western extension their new work location, with recruitment aimed at local residents, including a mix of skilled, semi-skilled, graduate and apprenticeship roles – and the expectation of more to follow in future years.

“South Staffordshire Council were also keen for the environmental impacts of the development to be minimised and I’m delighted that around 10,000 new trees have been planted across the site alongside other sensitive landscaping measures, which included a diversion and improvements to the public bridleway through the site and which has seen an upturn in local usage since the improvements were made.”

The western extension scheme includes a plan to boost employment skills, training and recruitment to local people with a £150,000 contribution – helping them to access the newly generated jobs.

The partners have also agreed a further £500,000 to support and promote sustainable travel activities, and £50,000 has been granted to Pendeford Hall Nature Reserve to help continue and develop its education, health and wellbeing, and personal and social skills development outdoor activities for local communities.