City of Wolverhampton Council has bid for £20 million from the Government’s Levelling Up Fund to help deliver its ambitious City Learning Quarter vision. 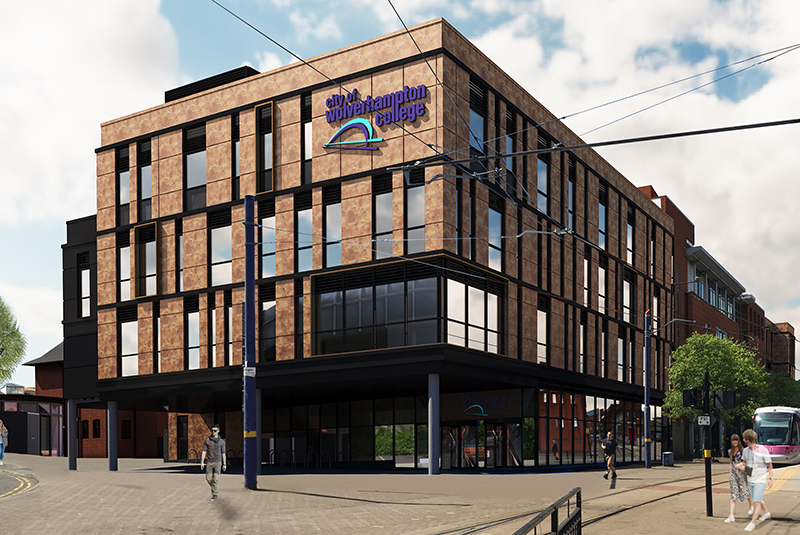 The bid is supported by Wolverhampton South West MP Stuart Anderson and the scheme has been consulted on extensively, has a strong strategic case for investment and already has planning approval in place.

The City Learning Quarter will be situated around the Old Hall Street and St. George’s Parade area of the city centre, incorporating a shovel-ready site on the corner of Garrick Street and Bilston Street, where the former Faces nightclub building once stood.

The purpose-built education facility will be set over 10,000 square metres and will provide a state-of-the-art learning environment for young people and adults in the city.

The inspirational facilities will also see investment in the building and public realm around them. They will encompass City of Wolverhampton College’s Metro One Campus, the council’s Adult Education Service and Central Library, creating an enhanced learning environment for everyone as well as significantly paving the way for City of Wolverhampton College to move from its out-dated Paget Road site, which has been identified as land to build much-needed housing.

In addition to the new facilities providing educational benefits for the city, the City Learning Quarter will generate and safeguard 750 jobs in the local economy.

City of Wolverhampton College forecasts that over a 10-year period approximately 45,000 people will benefit from learning at the City Learning Quarter and around 7,500 apprenticeships will be started.

Its central location and close proximity to the new £150 million transport interchange will make it easily accessible. It will also boast environmental benefits in line with council’s climate emergency agenda.

It is calculated that through energy efficient buildings and traffic reduction, more than 600 tonnes of CO2 emissions will be prevented from being released into the atmosphere each year. It is also estimated that our air will be cleaner due to 310kg of NOX particles not being discharged into the city.

The exciting proposals for CLQ have been supported by an initial £6.2 million investment from the Council and Black Country LEP, which has enabled design work, site surveys and ground investigations, site acquisition and clearance to be completed.

Councillor Stephen Simkins, Deputy Leader and Cabinet Member for City Economy, said: “The City Learning Quarter will have a visible and tangible impact on the City of Wolverhampton and its residents, making a massive difference to everyday life through direct investment in skills and education.

“We are working hard with City of Wolverhampton College to ensure we not only deliver a vibrant education hub where we improve the city’s learning, apprenticeship and employment offers, but also that we retain our best talent, rather than losing people to different parts of the region.

“The new facilities will provide a vital facelift as we re-imagine our city centre, which is benefiting from £1 billion of investment overall.

“The City Learning Quarter will be an inspirational environment for people to learn in and will offer excellent connectivity to rail, bus, tram and cycle.

“I have every confidence that when our plans become a reality, we will be creating an environment where everyone can flourish.

“It demonstrates the commitment this city has to investing in its citizens - not just buildings.”

City of Wolverhampton College L3 Uniformed Public Services student, Alicia Stanaca, said: “Future students of the College deserve to work in a state-of-the-art building in comparison to all other colleges. More people may find learning more accessible and study at the college – we can then get the jobs rather than people taking them from out the area.”

City of Wolverhampton College L2 Sport student, Chyna Nelson, added: “We can all make a difference in being environmentally friendly. Reducing my carbon footprint is particularly important to me. Having a city-based campus for City of Wolverhampton College will reduce travel for not only me but for many students. This is a great way to make the College more environmentally friendly. This can really make a difference to the City we can be part of saving the planet!”

The Government announced a £4.8 billion Levelling Up Fund (LUF) as part of the Spring Budget in March 2021. The fund will provide investment into infrastructure that improves everyday life across the UK, including regenerating town centres and high streets, upgrading local transport infrastructure, and investing in cultural and heritage assets.

A decision on the funding allocations is expected to be announced this Autumn.