City of Wolverhampton Council has submitted a final bid for over £20million to the Government’s Future High Street Fund to help deliver its ambitious city centre vision. 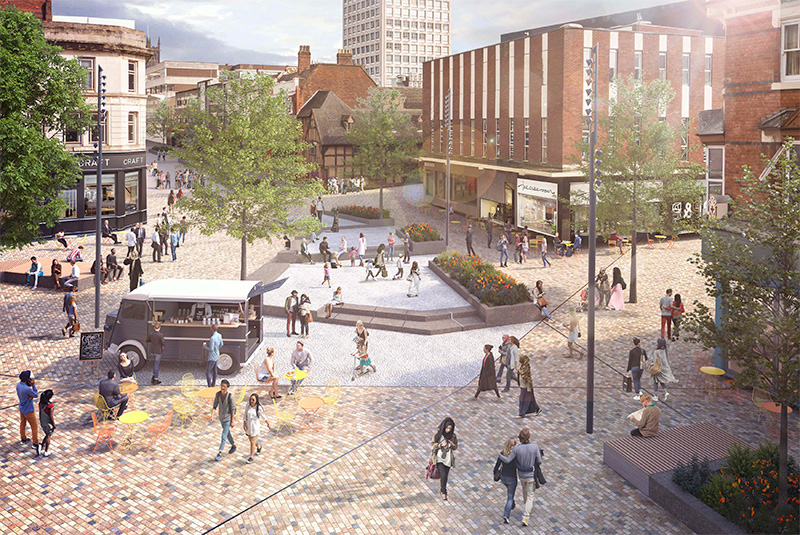 Since putting forward an outline business case to the Ministry of Housing, Communities & Local Government in January, the council has formulated its final plan with input from key city partners and businesses.

The plans focus on transforming 38 acres to the west of the city centre, focusing on Victoria Street, Bell Street, Fold Street, and public realm around the Civic Halls and the Westside development.

The area used to be part of the city centre’s retail core, but market and consumer behaviour changes have seen its fortunes suffer and the bid will look to address this.

The exciting proposals will also complement the council’s £32million ‘on site’ investment in restoring the famous Civic Halls to create an outstanding music and entertainment venue.

If the Future High Street Fund bid is successful it could create 450 new jobs, and potentially unlock the opportunity to deliver 100s of new city centre homes, a new 150-bed hotel, a fantastic new event zone and public space improvements which will make the city centre greener.

Independent commercial assessment shows the scheme has the potential to attract a further £185million in direct private sector investment – and, crucially, land earmarked for development is owned by the council.

The outcome of the bid is expected in Autumn 2020.

City of Wolverhampton Council Leader, Councillor Ian Brookfield, said: “If successful with the bid, we believe the money will make a real difference to residents and businesses by transforming our city centre.

“Support through the Future High Street Fund will build on the strong delivery that is already underway in the city centre, it will enhance and connect an area of the city centre that has, over recent years faced a number of challenges.

“We have developed – with partners - bold and ambitious plans to reimagine and transform our wider city centre area with better jobs, better skills, better entertainment, better city centre homes, better public spaces, better city centre events and better connectivity. This funding bid is integral to acting as a catalyst to attract further investment and development to realise this vision.”

Transformational development schemes already underway or in the pipeline for the city centre are the £150 million city centre Interchange, thousands of new city centre homes at Brewers Yard and Canalside, the multi-million-pound Westside leisure development, Civic Halls improvements, and being the UK’s first eBay partner on the Retail Revival scheme, which saw small businesses reach £7 million sales in just one year.

Councillor Brookfield added: “Reimagining and reinventing our city centre is a key priority. We have made a strong start, working with partners to establish transformational schemes.

“Future High Street funding will help us unleash our potential and unlock the creativity of our people with new opportunity and hope.”